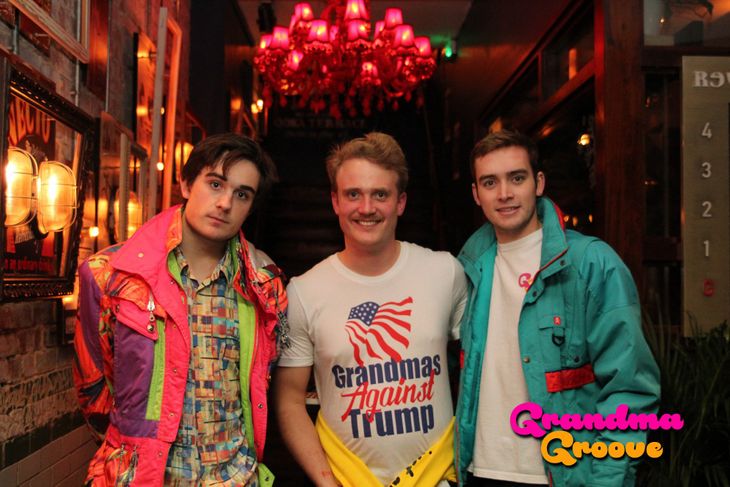 Since 2017, the team over at Grandma Groove have continuously succeeded in bringing a new approach to student club nights in Cambridge. Regularly hosting a range of next level resident student DJs and nights that have encompassed everything from a Grandma behind the decks to bouncy castles.

We caught up with Oscar Bell, one of the original founders, on the thought process behind Grandma Groove, challenges they’ve faced along the way and their top tips for success in the events industry.

Tell us a bit more about your brand and how it started?

Oscar Bell: Myself and the other original co-founder Ben Frazer met on a ski trip, we discovered that we both felt there was a need to mix-up the club scene in Cambridge and do things a bit differently.

We both went to university in the city and felt that there was a space in the market for a night that would provide students from both universities in the city with a unique experience - aside from just UK top 40 bangers. Our aim was to incorporate a range of top themes, music genres and live acts, to make each event stand out.

What was the scene like back then and how does it compare to now?

We’ve definitely seen an increase in events with a similar ethos to Grandma Groove come to life since we started in 2017.

We were also, previously, paper ticket focused so the movement to digital ticketing through FIXR has massively helped us grow. We’ve been able to minimise queues, manage capacity and reduce fraud, all through the FIXR Entry Manager App.

What are the key things that have helped you grow the brand?

Initially, help from friends and other students at my university was definitely key to the success of Grandma Groove. I was part of the rugby team and they constantly supported us in getting the word out about each event. Secondly, increasing our presence online and using promoters also massively helped us to reach new audiences and drive growth slightly later down the line. Fundamentally, if it’s an event that people enjoy and want to talk about, you’ll naturally see organic growth.

Also massive shout out to Luke Baines who joined the Grandma Groove team a few events in, he was fundamental to the events success and helped us to absolutely smash it.

What challenges have you and your team faced?

In the initial phases, we barely turned a profit. It was a case of 6 weeks of constant planning, searching for DJs, event concepting, looking for venues and just believing in the idea.

We also struggled to find good platforms to sell tickets on, the previous app that we used was slightly outdated and difficult to scan tickets from. We’ve found FIXR’s QR code scanning system much faster and easier to use, plus it allows us to get event goers into the venue as quickly as possible.

Fraud is also a big thing for us, especially people selling a ticket they’re intending on using, which can mean we have to turn people away on the door. We’re also trying to crack down on people purchasing first release tickets and selling them on for a profit as we want this tier to be reserved for the Grandma Groove regulars and mega fans.

With so many students to cater for - how long does it take for you to plan each year's events? What values are important to you when you're putting your schedule together?

We normally plan a few events in advance and always have a basic schedule of things to do before each event. As Grandma Groove is run roughly every 4-5 weeks, it gives us a bit of time to plan in between events. We normally look to ensure any outstanding costs are covered from the previous event and then book out venues for events coming up. Generally we’ll have an idea of the kind of venue we want to use in line with the theme of the event, so will look to book them as far in advance as possible. We also look to align our calendar with student timetables to ensure the events are at a time when most people can attend within a  term.

What inspires you and the kind of events you run?

We generally brainstorm names and themes for events and see what works together. A lot of names will be inspired by disco and funk songs. We’ve also previously run events inspired by films and soundtracks. We once ran an ‘Up’ inspired night where we streamed a thousand helium balloons along the ceiling and themed the entire decor.

We’re also constantly asking friends and event goers for feedback, to understand what's worked well and where we can make improvements. Previously we tried to run a cocktail making class in partnership with Revs, which we thought would be really popular but it didn’t sell. Unless we see an event get considerable traction, we normally wouldn’t look to run it again, it’s a case of testing and learning but having an understanding of the market and our audience to try and avoid disappointment.

Which other organisers are you following / do you rate at the moment?

We work closely with a number of partner nights through our resident DJs and who they are collaborating with. Slipped Disc, Queue the Music and Pink Week are examples of other events we’ve previously worked with.

Pink Week focuses on driving breast cancer awareness in Cambridge through a week of events aimed at raising money for Breast Cancer charities. We’ve previously supported them in running their first charitable club night where they raised around £3,000, which is something we’re super proud to have been a part of it.

Church in Edinburgh, is the city’s only dedicated bass music night, which has hosted some of the scene’s biggest DJs and producers. I think it’s another really good example of an event that has brought something different to a market.

How has the Covid-19 situation affected your events?

Currently we’re not able to run any events due to most of our events being run in indoor spaces with high capacity. Throughout lockdown we’ve been working closely with TERN, the Entrepreneurial Refugee Network, selling Grandma Groove t-shirts through FIXR and Facebook, with all profits going to the charity.

We’re hoping there may be some movement on the back of the most recent changes to lockdown measures so that we can get the Grandma Groove we know and love back up and running. However, in the meantime we’re looking to run a ‘Grandma Groove presents (socially distanced) Disco Bingo’ - watch this space!

In terms of features on site, which have been most valuable to you?

The speed of payment from FIXR has meant that we’ve been able to cover the cost of venues, artists and other hire fees as quickly as possible post an event.

The ticket transfer and scanning features also make it much easier for us to manage capacity, improve queue time and reduce fraud.

Plus the Analytics feature in the Organiser means we can monitor peak ticket sale periods, which helps us to plan when to release each tier of tickets.

What are your top tips for others that are looking to start running their own events?

How can we stay in touch with Grandma Groove and what you’ve got coming up next?

Hit us up on our Facebook page to get the latest on Grandma Groove and message us directly for GG t-shirts in aid of TERN.

Running an event? It’s free to list an event with us and you can start selling tickets fast. Click here to find out more and create your event now

Here to help. Hit us up with your feedback at team@fixr.co or use the live chat on fixr.co to speak to our expert team.

You've Been To An Event, How About Running One?

Spotlight On: So La Flair