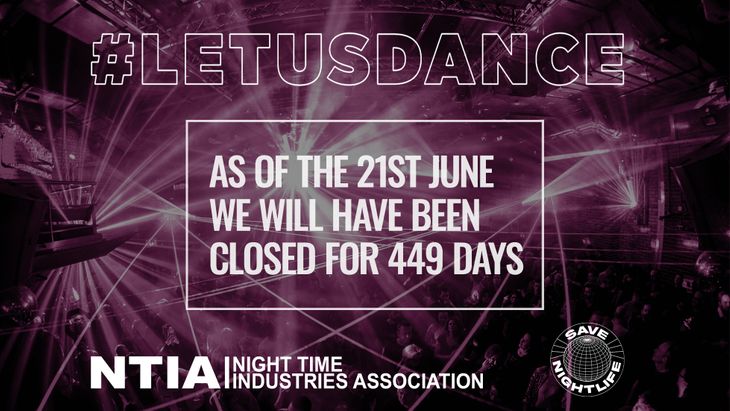 As 21st June 'freedom day' is delayed by four weeks, people in the nightlife, events and hospitality industries are asking for support.

NTIA teamed up with The Nasty Poet, editor Louis Pai and industry friends to produce this video to remind everyone what we are missing and what we are fighting for. Soundtrack by Daniel Avery's Lone Swordsmen.

15 months after the initial closure of hundreds of nightclubs, venues and events across the UK that have yet to be able to reopen, leaving over 5,000 planned live shows across the UK now at risk of forced cancellation (LIVE Association).

Over the past year, the Night Time Economy has seen the loss of over 700,000 jobs, billions of pounds in revenue has left thousands of businesses, artists and creatives in financial hardship.

Fans have spent a combined total of £1.3 billion on the UK’s return events, while 60% of music businesses have sold tickets to upcoming shows and club nights. Push back of this date by a further 4 weeks will leave companies who are overburdened with debt, at risk of permanent closure.

If you are an event organiser using FIXR, please get in touch with the team for help and support with your event postponement or cancellation.

If you have purchased a ticket to an event happening before the 19th July, you will be contacted by the event organiser or us via email about rescheduling or refunds.

How to Become a FIXR Brand Ambassador in 2022

Your Guide to New Year's Eve 2021 in England

Look At The Bigger Picture With Master Accounts

What Do The New Covid Rules Mean For Nightlife?

Your Guide to New Year's Eve 2021 in England

What Do The New Covid Rules Mean For Nightlife?