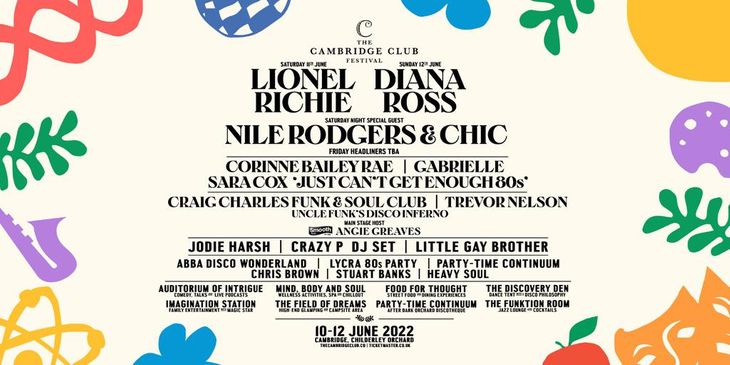 The Cambridge Club festival has announced the first acts to join its incredible, dance-inspired line-up for 2022 – and it doesn’t disappoint. Bringing the biggest names in Pop, Funk, Soul, Disco and R&B, the feel-good, family-friendly festival returns to the enchanting Childerley Orchard for more musical magic in the Cambridgeshire countryside. After a magnificent inaugural weekend in 2021, the expectations are high for 10-12th June.

The star-studded line-up is headlined by musical icons and global solo superstars alike LIONEL RICHIE and DIANA ROSS. A four-time Grammy winner, Richie is guaranteed to have everyone dancing All Night Long – with his catalogue of anthems from across a glittering career (Saturday 11th June). Crowned Billboard’s “Female Entertainer of the Century”, with over 100 million album sales to her name, Ms. Ross will perform a setlist of countless, timeless hits for the ultimate singalong to close the show (Sunday 12th June).

Saturday night’s special guests are none other than the iconic NILE RODGERS & CHIC – whose classic live show boasts a string of #1 hits, brought to life with signature, unrivalled musicianship. Rock and Roll Hall of Fame and Songwriters Hall of Fame inductee, and one of the most prolific songwriters of all time – penning career-defining hits for David Bowie, Madonna, Sister Sledge and more – expect a trademark tour-de-force from Nile Rodgers.

Further acts announced include Corinne Bailey Rae, who will serenade with her soothing, melodic ballads; Gabrielle who will bring some true homegrown R&B / Soul vibes; and Sara Cox makes a triumphant return with a nostalgia party like no other – in her stomping Just Can’t Get Enough 80s show. Friends of the festival Craig Charles Funk & Soul Club, Trevor Nelson, and Uncle Funk’s Disco Inferno are back to get us all dancing, as always.

Friday night’s headliners are also yet to be announced, so there will be even more music on offer for weekend ticket holders, alongside the huge bill of amazing artists released today.

As the sun sets and the night beckons, campers / glampers can head to the Party-Time Continuum After Dark stage for starlight sets from top DJs Jodie Harsh, Crazy P (DJ set) and more – who’ll be keeping the tunes spinning under the beautiful, twinkling orchard lights.

On top of their music offering, The Cambridge Club serves up a three-day feast of arts, culture and wellbeing, with something for all ages. Festival goers can start their morning by practising peaceful mindfulness and yoga, led by experienced instructors. Each day, their unique Orchard area hosts comedy, fascinating talks, and live podcasts. For children (and parents), The Imagination Station offers entertaining, educational, and energetic activities.

A wide variety of delicious food and drink is available, with cuisines from all over the world to whet the appetites of festival goers. There will be a multitude of tasty stalls and street food options – from wood-fired pizza and hoisin duck wraps, to freshly made crêpes and warm chocolate chip cookies – to tickle the taste buds, as well as sit-down dining experiences too.

The Childerley Orchard site – just a few minutes outside of Cambridge city centre, and close to Cambridge North train station – captures the unique essence of The Cambridge Club. Centred around an ancient Orchard, it offers an idyllic backdrop for your favourite music with your favourite people, nestled in the heart of the sublime Cambridgeshire countryside.

With such massive musical legends and an incredible array of cultural experiences, all located in this stunning setting – The Cambridge Club festival 2022 is set to be an unmissable event. Stay tuned for further announcements about areas across the festival.

The festivals’ MD William Young said: “We are honoured to be welcoming such iconic artists to The Cambridge Club next year. Since we started out, these were some of the dream names on our list, so we're absolutely blown away to be able to announce them. It’s the most apt and exciting line-up we could have wished for following the breakout success of last year – it really embodies the feel-good, dance-focussed philosophy at the heart of the festival, and spans the generations so there’s something for all ages. The 2021 event was incredible – to see people coming together to celebrate and dance after a tough couple of years was magical. We can’t wait to welcome even more of you to The Cambridge Club next June. We’re upping the levels and turning up the party, so don’t miss it!”

How Building a Website Helped Bonanza Build a Brand